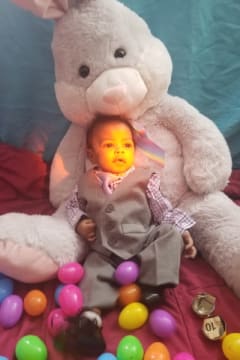 Larry Keith Wallace III affectionately known as Tre’ was born on December 10, 2019 in Novi, Michigan to Larry K. Wallace Jr. and Zina D. Wallace. He was the only child born into this union.

Larry came into his parents lives after a long struggle with infertility as a blessing that could only have come from God. Everyday that Larry spent in this world he brought joy to all of his family. Although only spending a short period of time on this earth Larry had learned to roll over, smile, laugh and give the best facial expressions. Those eyebrows are definitely something to remember

Larry’s parents took him to church many Sunday’s at Kadesh Baptist Church where he was able to hear and take part in services that he always seemed to enjoy. Larry was definitely an angel on earth who brought hope and happiness to all those he encountered.

On April 29, 2020 at 5:50AM the Lord called Larry back home to be with him at Children’s Hospital as his purity had done its job by touching so many on this earth. He was preceded in death by his great grandfathers Arthur L. Thomas and Harold Wallace, great grandmothers Earlene Manigault and Edith Burnell.

My prayers are with each of you ay this time. To Larry and Zina I can only imagine your pain but I know God has a plan and he is the author of our faith. Double blessing be unto you both. April
- April Wallace
Our little nephew Tre and Mariah's baby Godbrother. You brought so much faith, joy, and excitement to our lives. From the moment we learned your mommy and daddy would be adding to their family, we knew how special you would be and how you would change us all for the better. And while there are so many plans we all had for and with you, we are thankful for each and every moment we got to see your smile and those dimples; where we got to hear you coo and cry ; where we got to laugh at your mean mug eyebrows; and where we got to see your mommy, daddy, family, and friends shower you with love and care. You will always be remembered as our miracle baby and now our angel. To Zina and Larry, there are no words that can mend the wound left on your hearts, but please know that you are surrounded by love and unending support. We love you always. Rest eternally in peace nephew. The Berrys
- The Berrys
No amount of words can express my condolences. Sending my love, and prayers and hope you are able to find strength in God during these dark times. I love you Auntee Lillie
- Lillie White