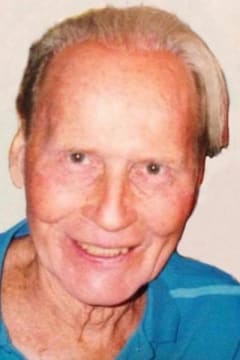 John Bernard Picking was born December 31, 1923 in Detroit, Michigan. The son of proud Irish immigrants, Thomas Patrick Picking [County Mayo] and Sarah Bridget McEvoy [County Meath]. Born the third of five children, Alice Mary, Thomas Patrick Jr., John Bernard, Florence Ann, and James Donald. He was christened into the faith at Most Holy Redeemer Catholic Church in 1924. He grew up in northwest Detroit where he attended St. Theresa’s, Pattengill Elementary, and Northwestern High School, and his home parish, St. Theresa’s.
As a young man, he traveled the country with lifelong friend James Richard [Dick] McCann. Like many of his generation, when WWII broke out he was drafted into the Army Air Corp and inducted at Fort Wayne, Detroit, Michigan. In 1947, he married Rita Johanna Merk. Their marriage was blessed with five children, Rita Marie, Therese Sarah, Cecilia Ann, Patrick John, and Michele Mary. He was a dedicated, supportive, and loving father.
As a young man he became interested in real estate, and investment which eventually became his lifelong career. For a period of time, as a real estate broker he formed his own company John Picking Realty in Lincoln Park, and then later worked independently from his home in Dearborn.
During the 1960s, he returned to school attending both Henry Ford Community College, and Wayne State University earning a Bachelor’s Degree in Education. In addition to his real estate and investment pursuits, he briefly taught school in Detroit. He was also the owner and operator of the Downbeat Bar located in Detroit.
Another lifelong passion was physical fitness. He ran track, swam, played softball on several teams, and stayed physically active all his life. He was an avid handball player up until the age of 83. He played both nationally at the annual tournament in Maumee, Ohio as well as internationally in Australia where he took second place in his age group.
He also had a lifelong interest in travel. During the late-1960s up until the mid-1970s, he took his family on many trips; out west, Mexico, and Central America [Panama, Honduras, Guatemala]. Later in life, he traveled to Ireland to visit his ancestral home, and reconnect with family. He also traveled internationally using a parent flight pass with his daughter Rita, a flight attendant.
He is preceded in death by his parents, siblings, wife Rita, daughter Cecilia, and granddaughter Lisa Marie Serignese. He is survived by his daughter Rita Picking, daughter Therese Serignese, son Patrick [Sharon] Picking, and daughter Michele Borissov, grandsons; Gary Serignese, Michael Borissov, and Michael Serignese, and granddaughter Shannon Picking. With all the love in our hearts we say, ‘see you later.’
John departed this life on October 14, 2020 after living a full and active life. He will be interred in the Picking family plot at Holy Sepulchre Catholic Cemetery, Southfield, Michigan.

Please share a condolence, photo or memory of John. We welcome all condolences that are positive and uplifting that will help family and friends heal.